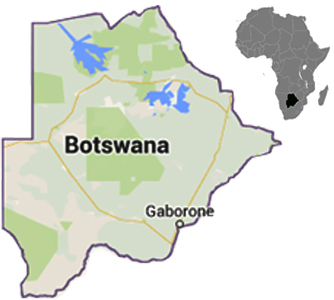 This is a land of surprising variety encompassing the Kalahari Desert, with its ancient watercourses and dead lake beds, The Chobe River with its large herds of elephants and the Okavango Delta with its winding waterways, islands and reed beds.

Woodlands, kopjes, savanna, farmlands and urban areas add to the diversity of habitats shared by Botswana`s population and wildlife.

The Government, aware of this rich heritage, has protected large areas as National Parks and Game and Forest Reserves, while the National Conservation Strategy provides for conservation ideals and practices to be incorporated into developments.

Tourism is facilitated by well-developed links to the world`s airways systems and world - class accommodation. Visitors flow in to share inthe Botswana experience of wildlife, notably elephants in the North and birdlife in all environments.

Botswana maintains a conservative issuing policy. A definitive set is released every 5 years illustrating a theme of international interest. Commemorative sets are issued 4 or 5 times per year illustrating themes that reveal the environmental, cultural and historical heritage.

The Botswana Philatelic Bureau established in 1965, is responsible for the designing and issuing of Botswana`s stamps. The Concept, design and printing of the stamps are alaways of high standard and reflect a balance of interests, with a preference for themes and events that bear relevance to Botswana`s historical development and its` economic and social activities.